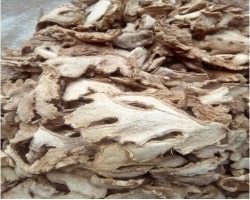 Ginger (Zingiber Officinale) is a commodity that known for its aroma, pungency and high oil .Nigeria is the third largest exporter of ginger in the world after China and India. Most of the dried ginger that are available for international trade are simply sun dried over a few days, but artificial drying is also used in areas lacking a defined dry season to coincide with the harvest. The rhizome is dried to between 6 and 9 per cent moisture content. Dried ginger is usually presented in a split or sliced form. Splitting is said to be preferred to slicing, as slicing loses more flavor, but the sliced are easier to grind and this is the predominant form of dried ginger currently in the market.

Harvest: Harvesting of ginger starts from October and normally continues until April/May. This largely depends on the market situation as ginger can be left on the ground (not harvested) for two years.